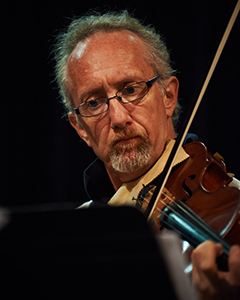 David Visentin is widely known throughout Canada as a performer, conductor, pedagogue and arts administrator whose leadership and creative experience in the performing arts has successfully advanced classical music from coast to coast. In 2011, founded Sistema Toronto and was appointed as the organization’s President and CEO. Sistema Toronto is a free and uniquely immersive after-school social program through music for at-risk children and youth, modeled after the highly successful program known as el Sistema.  For six years, as dean and associate dean of The Glenn Gould School and Young Artists Performance Academy of The Royal Conservatory of Music, David led the school through its historic transition to becoming a leading professional training program for classical musicians and singers. He also served as the principal conductor of the Royal Conservatory Academy Orchestra.

David Visentin has taught at the University of Manitoba, Memorial University Newfoundland, Mount Allison University, Royal Conservatory of Music, Canadian Mennonite University, Courtenay Youth Music Camp, Symphony Orchestra Academy of the Pacific and the Agassiz Chamber Music Festival.  He has a Bachelor of Music in Performance from the University of Toronto, studies in the Bachelor of Commerce program from Simon Fraser University and an Arts Administration Certificate from the Banff School for Continuing Education. He continues to perform and is the current, and founding, Artistic Director of the Salt Spring Chamber Music Festival. In May 2016, David was appointed as the Director of the Department of Postsecondary Studies with the Victoria Conservatory of Music and as Chair of Camosun College Music.