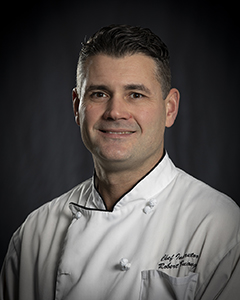 Robert brings over 20 years of hands-on hospitality industry experience to Camosun College. He is a certified Red Seal chef and has attained his Provincial Instructors Diploma. He has worked for some of the leading world-class hotels and resorts including Marriott, Renaissance, Westin and Fairmont brand hotels.

Robert began his career as an apprentice at the Fairmont Jasper Park Lodge. After receiving his trade qualifications, Robert worked his way up the culinary ladder in the kitchens of the Fairmont Vancouver Airport, the Delta Ocean Pointe and Spa, the Fairmont Whistler, the Fairmont Waterfront, the Fairmont Palliser, the Westin Bear Mountain Resort, Black Rock Oceanfront Resort and the Westin Edmonton.

In 2014, Robert became the Executive Chef with the Oak Bay Beach Hotel; this opportunity led to his first experience teaching as a contract Instructor at Camosun College. Robert left Victoria to head up the kitchen as Executive Chef at the Renaissance Edmonton Airport but returned to join the Camosun Culinary Arts program full time in 2015.