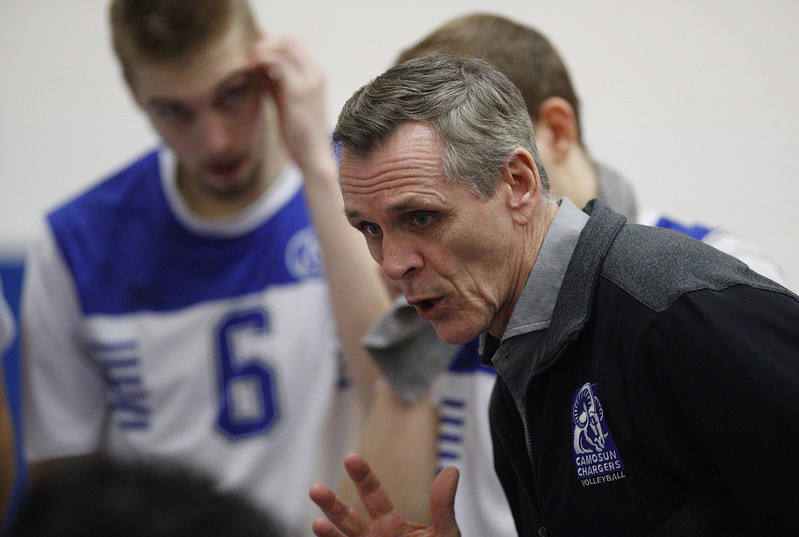 “The Chargers and our student-athletes owe a huge debt of gratitude to Coach Parkinson,” says Camosun President Sherri Bell. “Not only is he the winningest coach that Camosun has ever had, he is incredibly well liked and respected. Thank you, Charles, for your dedication, devotion, and passion for the Chargers men’s volleyball program and our teams.”

Under the leadership of Parkinson, Camosun made history by being the only team since the formation of the conference in the 1970s to win four PACWEST Championships in a row, with six straight appearances in the finals. He is optimistic that this will be season seven.

“I have had a great run here but all good things must come to an end and I see this as the start of a new beginning,” Parkinson says. “My career in volleyball is not coming to an end, it’s shifting to something else that is not as hands on with the student athletes on a daily basis.”

In junior high school, Charles was always athletic but when he was hit with tuberculosis he was side-lined for a year-and-a-half to recover. When he did return to sports, doctors told him that he shouldn’t do anything strenuous, but said volleyball would be okay. So he took up the game a little later than some of his teammates in grade 11. “I was really terrible, like terrible,” Parkinson says. “I didn’t like not being good, so I worked hard, kept playing, and got better. Eventually I was asked to the national team camp, made the team, and ended up becoming the captain of the team, an experience I’ll never forget.”

After four years on the Canadian men’s volleyball team, he continued to play in the club system and shifted gears to coaching when he joined Vancouver Community College (VCC) Langara, winning two Totem Conference titles. Parkinson was also an early pioneer in beach volleyball and earned a chance to compete in the World Championships in Redondo Beach, California.

Charles took some time off coaching while his family was growing and took on more of an administrative role at the national and provincial levels as the Chair of Canada’s National Team Programs. He followed his passion for sports professionally as Executive Director of Volleyball BC and then as Multi-Sport Services Manager with the Government of British Columbia. Over a 20-year career with the province, he rose to the position of Executive Director of Sport and Physical Activity for BC, and was asked to lead BC150, the province-wide celebration of B.C. as a Crown Colony in 2008. After working on the Olympic bid and heading up the community celebrations for the Torch Relay in 2019, he left the government and joined Camosun College as a sessional instructor, then full-time faculty member.

After casually coaching at the club level, Parkinson was asked to help out with the Camosun Chargers men’s volleyball team in 2007, and took over as head coach the following season. In his first year with the team, Charles led the squad to a Provincial Championship title and a National Bronze medal finish and was named PACWEST Coach of the Year, an award some of his previous athletes have since received.

As the winningest coach in Camosun Chargers history, he has claimed six PACWEST Conference Championship gold, twosilver, one bronze, and a CCAA National Championship and National Bronze medal. He also added one PACWEST Championship with Vancouver Community College early in his coaching career. Charles is the most decorated men’s volleyball coach in PACWEST history.

Charles has been a believer in professional development and has taken many courses over the years so he can mentor and evaluate younger coaches who aspire to coach at the high performance level. He is also a multi-sport Learning Facilitator and a Performance Coach Workshop facilitator.

“I’m not going to stop being involved in volleyball or sport, it’s just the nature of my involvement is going to be different,” he says. “I hope to be behind the scenes helping people realize their potential as coaches as I share my experiences and education.”

“It’s the right time,” Charles says. “New, younger coaches need space to carve out their own identity and bring their own ideas to create their vision for the Camosun Chargers Men’s Volleyball Program. I look forward to supporting them in any way they need.”

Charles’s last game at home is Saturday, Jan. 29, 2021 at 3pm in the PISE gym at the Interurban campus. The community is encouraged to come cheer on the Chargers and celebrate the success of the team and of Charles.

Charles always says, “once a Charger, always a Charger and you’re always welcome in our gym and locker rooms.” The door is always open for you Charles.