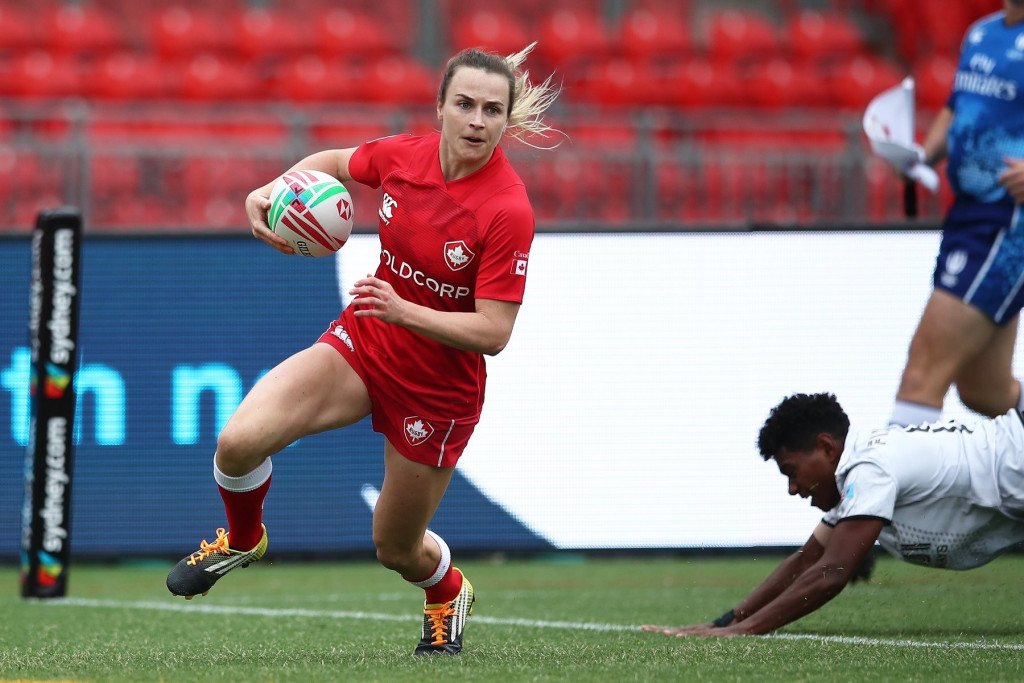 Julia about to score a try in match play

All eyes will be on Tokyo as the Japanese capital hosts the Summer Olympic Games later this month and Camosun College will be represented on the world stage by bachelor of sport and fitness leadership student Julia Greenshields—a key member of the Canadian women’s national rugby sevens team.

“I don’t know if it’s hit me yet—I’m anxious and nervous and excited and focussed on training like we always do,” says Greenshields. “I think the reality of it all will set in when we’re all actually at the airport.”

Taking off for her first Olympics is a milestone moment representing years of high performance athletic training, focus, teamwork and hard work. And the personal significance of the opportunity to travel and compete at the highest level, far from home, is not lost on Greenshields.

“It’s funny because I never had that Olympic dream, I didn’t play sports when I was growing up and neither did anyone in my family,” she explains. “When I was in high school in Sarnia, in Ontario, I heard about a class field trip to North Carolina and really wanted to go. I was told I had to play rugby, and I didn’t even know what that was, but I said ‘sign me up, let’s play rugby then’ because I really wanted to go to North Carolina!”

That split second decision changed her life, and set her on a course of both athletic and educational excellence, moving across the country from Ontario to B.C. to train for the past decade with the national team in the milder climate and encouraging sports culture of Victoria. Then, in spring 2020, the COVID-19 pandemic hit, rugby was put on hold and Camosun College beckoned.

“When the pandemic happened, I thought, I really need to get back to school, I need to focus on getting my education and preparing for what’s next in life, after rugby.”

Having trained regularly at the Pacific Institute for Sports Excellence (PISE) on the college’s Interurban campus, and worked closely with trainers and athletic therapists associated with Camosun, she knew of the college’s top reputation for sports training and educational excellence.

“Camosun was the perfect fit,” she says, while expressing appreciation for her instructors and classmates who have enthusiastically supported both her educational and Olympic journeys since enrolling. “I absolutely love it here and when I go to class and learn new things, I’m able to apply them to rugby because I’m learning more about how my body moves and when I’m working with my strength and conditioning coach, I’m understanding the anatomy and the science and the concepts behind high performance athletics. I’ve been a national team athlete for almost ten years and going to school has helped me gain even more of an edge.” She notes that she is “blessed and extremely grateful” to have received the Lois M. Smith/Commonwealth Scholarship for Athletes last month, awarded to a student who has represented Canada or their province by competing in a major international or national event.

When Greenshields arrives in Japan next week, the Tokyo ‘pandemic’ Olympics, rescheduled from last summer, will be different than any previous editions, without any cheering spectators in the stands, according to strict COVID-19 protocols recently announced by the Japanese government.

“One thing we prepare for when going into international competition is to anticipate that the crowd is going to be really really loud, and not letting that become a distraction, so it will be very interesting to be in a completely quiet stadium,” explains Greenshields. “What I’m most disappointed about is that my family won’t be able to come with me and be there to watch, but I do hope to continue and compete in the next Olympics in Paris and I’ve told them—you’re going to come and watch me play then!”

After the Olympics, and when she completes her Camosun degree in three years time, she has big plans for her future.

“One day I hope to become a strength and conditioning coach, and perhaps coach young rugby players in the future,” she says, with characteristic enthusiasm and positivity. “I hope that the sport of rugby continues to grow and there are more teams and more players and I want to be part of supporting young athletes to achieve their dreams.”

Her advice to anyone pursuing an Olympic dream or wanting to train as a high performance athlete? “Surround yourself with people who are going to support you and motivate you,” she says. “And most of all—show up. I tell myself that all the time when I’m tired and don’t want to get out of bed, ‘show up’ because as soon as I put my cleats on, and show up to training, things start to fall into place. I’ve never regretted being there, I’ve never regretted showing up for training—I just keep riding that wave every day.”

As she goes for gold in Tokyo, Camosun College wishes Greenshields, and her rugby sevens teammates, a tremendous virtual wave of support from Victoria all the way to Japan!

Discover your path to a healthy, active and fulfilling career.