The Camosun Chargers volleyball teams played their hearts out this past weekend in Abbotsford at the Pacific Western Athletic Association (PACWEST) championships. 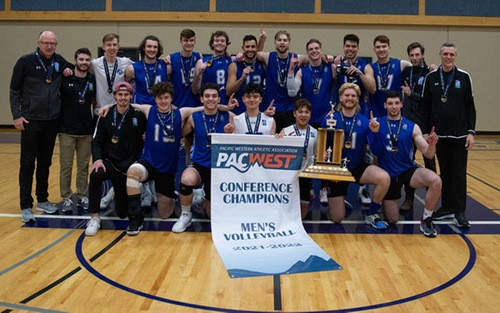 The Chargers women’s team defeated the Capilano Blues in an exciting four-set match (25-15, 22-25, 25-17, and 25-23). The team used a balanced attack led by Hannah May (Belmont Secondary/Victoria, BC) and her 12 kills, while Chantelle Dobie (Salmon Arm Secondary/Salmon Arm, BC) played middle with 10 kills and several big blocks. Rookie Rachel Leduc (College Jean-Eudes/Montreal, QB) was a major factor during the tournament, finishing with eight kills.

Dobie was named Chargers Player of the Match and Mika Yamada (Rifu High School/Sendai, Japan) was named to the Tournament All-Star Team.

The men’s volleyball team is heading back to the national championship after a huge come from behind, fifth set victory over the nationally number one ranked Vancouver Island University (VIU) Mariners to win PACWEST gold (25-18, 25-21, 22-25, 15-25, 13-15).

Down two sets to the top team in the country, the Chargers battled back to win three straight sets and capture the gold medal. Rookie Jacob Ringma (Centennial Christian/Terrace, BC) came into the game for the third set which seemed to make the difference for the Chargers as he recorded several key kills and gave the squad another offensive option behind Vitor Pereira (Izabela Hendrix/Belo Horizonte, Brazil)and Eduardo Bida (Colegio Gabarito/Uberlandia, Brazil). Ringma picked up Player of the Match with 10 kills in three sets, while Pereira and Bida combined for 32 kills.

“We have been confident about the success the volleyball teams would have this season and during playoffs,” said Vice President, Student Experience, Heather Cummings. “For the men’s volleyball team to bring home the PACWEST trophy as head coach, Charles Parkinson’s last season, is beyond amazing. We are so proud of what both teams accomplished this season and wish the best of luck to the men’s team at nationals. Go Chargers!”

The men’s volleyball team will head to Cégep Limoilou in Quebec City, QB at the end of March to face off against the top teams in the country at the CCAA National Championships, which run March 24-27, 2022. The top eight teams from across Canada will have the opportunity to compete for the country’s highest honours. Full tournament schedule can be found on the CCAA Championship website.

Catch all of your Camosun Chargers' action online through the official Chargers YouTube channel.