The Chargers basketball teams are ready tip-off the season this week against Island rivals, Vancouver Island University (VIU) Mariners. Basketball action will hit the court at the Pacific Institute for Sport Education (PISE) on Friday Nov. 4. 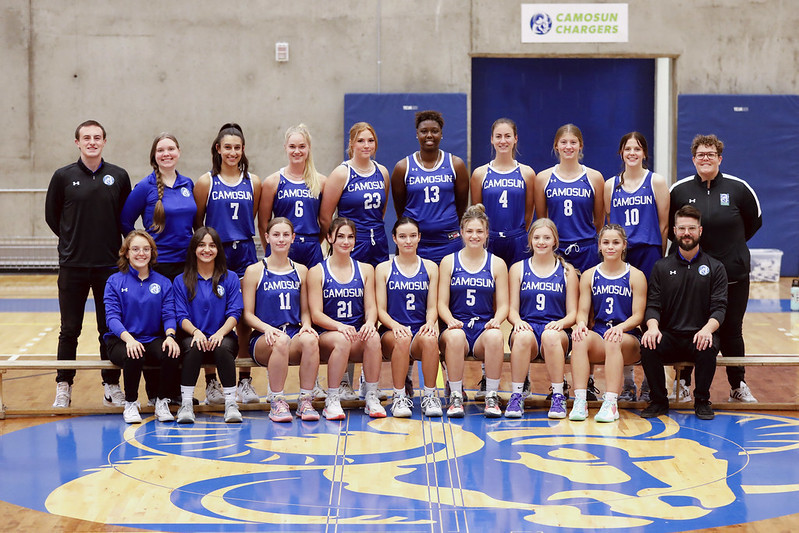 For several years, the men’s basketball team has boasted that the majority of their roster is made up of local talent; this year 11 of the 16-man roster attended high school in Victoria. This gives the team a strong starting point in knowing and understanding each other, or for some players, they watched predecessors compete through high school and are now in the same program, and is a testament to the strength of basketball culture in the capital city.

“This team has a special dedication and commitment to each other and have made great progress in the preseason,” said Camosun Chargers Men’s Basketball Head Coach, Geoff Pippus. “The roster is deep and balanced, with a number of threats who are capable of a big performance on any given night.”

Whereas, the women’s basketball team claims a diverse roster of players from around the world, with athletes from the United States, Switzerland, Scotland, and Senegal, as well as representation from the Yukon, Alberta, and B.C.

“This group is doing it the right way,” said Camosun Chargers Women’s Basketball Head Coach, Justin Thiessen. “We have a strong character group that supports each other on and off the court. They are ambitious and self-aware with some of the strongest leadership I’ve seen in a long time.”

“Fans can expect a team that has committed to each other and competing every time they step on the floor,” added Pippus. “This is a great group of young people whose enthusiasm and genuine care for each other stands out. We are excited to see where we stack up in a competitive PACWEST conference.”

On the women’s side, Chelsea Espenberg (Kelowna Secondary/Kelowna, B.C.) is returning for her final year and Rhiannon Ware (Medicine Hat High School/Medicine Hat, AB) is suiting up for her fourth year of eligibility. Both athletes have been really strong moving into leadership positions and taking on additional responsibilities.

Pippus joins the Chargers for his first year as bench boss for the men’s basketball team. He is backed with a strong supporting crew. Dylan Marsden is returning for his fourth year as assistant coach following a 5 year playing career for the Chargers. Former VIU and University of Victoria (UVIC) star, Chris Marsh, is leading player development. Isaac Groom and Matthew Nasrallah join the team as student athletic therapists.

Thiessen returns to the bench for his fourth year leading the women’s basketball squad, and is supported with returning assistant coach, Tyson Stapley, and new addition, Angela Coutts. Both bring a wealth of experience, knowledge, and leadership to the team.

The full PACWEST schedule can be found on their website at www.pacwestbc.ca.

The Camosun Chargers Athletics Program currently fields teams in basketball and volleyball. Since joining the Canadian Collegiate Athletics Association (CCAA) and PACWEST conferences in 1994, the Chargers have competed in over 100 national and provincial championships with over 50 medal winning finishes.